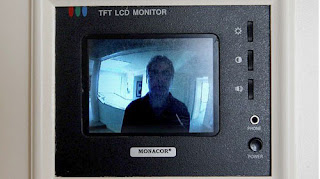 The rich often pay big money to protect their homes, whether from thieves, intruders or nuclear attack.


THE THIEF or thieves who recently walked away with an Encino couple's multimillion-dollar art collection, including a Marc Chagall and a Diego Rivera, shouldn't have had a prayer.

In a universe where wealthy people pay millions to protect jewelry, yachts, cars, Oscar statues and wine collections, experts said the real crime is that the criminals got away with the goods so easily.

"The moment the thieves entered the property, they should have been detected, documented and deterred," said Al Corbi, president of SAFE, Strategically Armored and Fortified Environments, a Los Angeles-based company that designs sophisticated security systems for clients worldwide.

That scenario might include an outdoor camera flash and a booming voice telling the intruders they've been photographed, typically a strong deterrent to burglary, Corbi said. If that doesn't do the trick, then a recorded voice can announce to the thieves when they enter the house or touch a painting, "This system is armed and ready to fire, you are in harm's way, leave immediately!"

"You can do that remotely from your safe bedroom in the house or from a sidewalk in Paris," Corbi said. "We do a lot of those."

Whether for the über-rich or regular folk, security experts' toolboxes are brimming with devices -- some simple, some high-voltage (literally), everything from a good $10 window lock to a nuke-safe underground hide-out that costs millions.

"You can have a moat with alligators if you want," Chris E. McGoey, a Murrieta-based security expert, said somewhat facetiously. "I've seen celebrities have vicious, barking dogs on a loudspeaker, and I've heard recordings of guns being cocked. You can have a net drop down on home invaders."

Click "Read More" to read the rest of the story.

Corbi recently was commissioned to design a Bat Cave, as he calls it, to protect a car collection. The design included a waterfall in front of the garage, which parts, Red Sea-like, when the owner arrives home. The door opens, a steel plate slides out of the garage, and the driver pulls onto it. The plate then slides back into the garage and onto a turntable that pivots to the car's parking spot on a platform, 2 feet off the ground. Cost: $2.5 million.

Some of the most sophisticated systems being built today are intended to protect people, not property.

One client commissioned Corbi to design a two-story, subterranean shelter that could withstand what Corbi calls the NBCs: nuclear, biological and chemical attacks. That shelter design included a pizzeria, a theater and enough food and water to last years. The cost? "You can only imagine," Corbi said. "One client wanted a putting green for golf in his nuclear shelter," he added.

Beverly Hills luxury real estate agent Bob Hurwitz listed an Encino home for sale whose previous owners included a recording-industry titan who put in a "safe room" lined with Kevlar. It was hidden behind a wall that opened -- just like in the movies -- by touching a certain spot on the wall. A Montecito client not only dedicated one entire room to a bank vault for the family's valuables, but also had a $36-million underground tunnel that led to a secret guesthouse.

Inside the house, some owners create what Corbi calls a "safe core," such as upstairs bedrooms that, with the locking of one or more special doors, are sealed off from the intruder.

A "safe room" typically has one opening, is fortified with a solid core or steel door and has 3-inch screws in the door hinges, heavy-duty lock strike plates and a strong deadbolt lock, McGoey said. It is equipped with an alarm pad, a cellphone, a flashlight, a first aid kit, food and water.

How far homeowners go on the security continuum depends on the size of their pocketbooks and the degree of their paranoia. "You can secure windows, doors, the garage and create a safe core for $1,500," said Lana Corbi, vice president of marketing for SAFE and Al Corbi's wife, "or spend seven figures and know when someone puts a toenail on your property."

At the least, veteran L.A. Police Det. Bill Longacre said, owners should "make it appear that your house is protected, even if it's not. Have good lighting and a good line of sight so people can see the front of the house." Test alarm systems regularly, he added. "And use it if you have one. Most people don't."

via latimes
Posted by House of Onika at 1:32 AM
Email ThisBlogThis!Share to TwitterShare to FacebookShare to Pinterest
Labels: Security