Paul Newman Dies At Home As He Wished 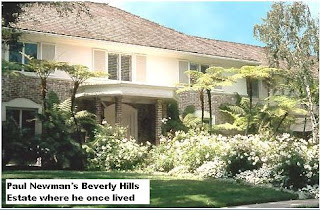 We'd really like to keep this blog as chirpy as possible but we can't keep the legendary Paul Newman's passing off our radar. We just love him dearly through the eyes of our parents who grew up watching Paul Newman's films.

But a pressing thought has been running our mind: WHY DID PAUL NEWMAN CHOOSE WESTPORT, CONNECTICUT OVER THE OTHER LAVISH ESTATES?

Answers after the jump

Many of the actors, actresses, authors, etc. reside in Connecticut for many reasons. Among those being that folks in Connecticut are reserved and conservative spenders. Being flashy here is considered tacky and resembles poor taste. Some of the richest residents drive that 1990 Volvo or meticulously maintained 1989 Mercedes. I've found that Connecticut appeals to the more fiscally conservative and down-to-earth individuals - Rosie O'Donnell, Diane Sawyer, Regis, Newman, Letterman, Mel Gibson, Mia Farrow, Meg Ryan, Judge Judy and many more. There are very few "Paris Hilton's" around, and nobody feels they have to flaunt their wealth. Basically, Connecticut isn't a 'flashy' place to live. It's a nice place to call home with an excellent quality of life - some say people here are snotty - I call it reservation.

The state is rather rustic, leafy and private. While CT is the 3rd most densely populated state, towns have strict ordinances that limit those 'cookie-cutter' neighborhoods so well-known in other areas of the nation. The suburbs here, for the most part, lack the big-box stores and chains - instead embracing privately owned shops and a few upscale chains. Don't get me wrong; there are suburbs with big boxes (Milford, Orange, Danbury, Manchester to name a few) but the average Connecticut town opposes the Walmarts and Targets.

A LITTLE FACT ABOUT PAUL NEWMAN:

Rumours about his health surfaced in January. Three months ago, he withdrew from directing a production of Of Mice and Men in his home town of Westport, Connecticut.

He was pictured leaving the Weill Cornell Medical Centre in New York, which specialises in cancer treatment, in a wheelchair on July 31.

Newman was nominated for ten Oscars, winning best actor for his role in The Color of Money in 1986.

Posted by House of Onika at 11:46 PM
Email ThisBlogThis!Share to TwitterShare to FacebookShare to Pinterest
Labels: News