Sex and the City Tour Falls One Apartment Short Call it “Stoop and the Groupies.”

With the May film release of “Sex and the City,” flocks of female fans of the show once again are pouring into narrow Perry St. in Greenwich Village. But as waves of women visit the front steps of the imaginary home of Carrie Bradshaw, tempers in the community have begun to flare.

Visitors are lured to the area by the fictional lives of the characters created for the popular TV series. They sit for photos on “Carrie’s stoop” and shop in local boutiques. They wait on line for cupcakes at nearby Magnolia Bakery, then sit outdoors eating them on a nearby bench — just like Carrie and Miranda did.

For the show’s fans, at least, it seems a picture-perfect ritual. Yet, in the sweltering heat of summer, some neighbors are resenting all the ruckus and seeking an end to “Sex and the City” tours on their streets.

Last week, residents won a reprieve, when, on July 15, the largest of the tour operators, On Location Tours, announced it would take Perry St. off its route.

Click "Read More" to know if there were any "substitutes."


In 2001, Georgette Blau, president of On Location Tours, hatched the concept of “Sex and the City” tours. For a $40 fee, the company treats fans to a three-and-a-half-hour jaunt around Manhattan — to spots that have garnered cultlike followings from the TV series.

“It’s very upsetting to us,” Blau said about her company’s decision to drop Perry St. She said certain residents lobbied hard to scratch the destination from the tour. “I do understand that they don’t want to see hordes of people on their street,” Blau said, “but, we were so understanding.”

Gerald Banu lives a few doors down from 66 Perry St., where Carrie’s character lived on the TV show and on whose stoop actress Sarah Jessica Parker, who portrayed her, often sat while talking to her latest flame.

Desperate for intervention to stem the “Sex” invasion, Banu, the president of the Perry St. Block Association, helped enlist Community Board 2 to staunch the flow of tourists down his street.

“We had one group of 50-plus people walking down one side of Perry St. and another group of 50 people coming from the other side,” Banu said. “Visitors are fine. We get two, three or four people taking a picture. But when we’re getting lines and lines of people, it is not. 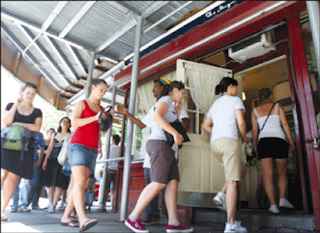 An army of “Sex and the City” fans filed into Magnolia Bakery on Saturday to buy cupcakes, just like Carrie and Miranda did on the TV show.

“C.B.2 really helped us out on that one,” Banu said of the tour company’s decision to cut out Perry St. He said it has already impacted foot traffic, which spiked following the movie’s release. “Mostly it was from On Location Tours,” he noted.

Aubrey Lees, a former C.B. 2 chairperson who lives on Perry St., was happy to hear from The Villager that the main “Sex and the City” tour operator had removed the street from its itinerary.

“That’s the best news I’ve heard all day,” Lees said. “I think everyone on Perry St. and the surrounding block is relieved.”

Lees walks her dogs each morning at Bleecker Playground, which she called “an absolute hellhole” due to another “Sex and the City” tour side effect — cupcake liners strewn on the ground.

The show’s fans eat their cupcakes on benches in the park next to Bleecker Playground on Hudson St.

“It is completely a mess and littered with little cupcake holders,” she said, adding that Magnolia Bakery is also to blame for doing nothing to keep the park clean.

“First of all, it’s pointless and stupid,” Lees said of the “Sex and the City” tours. “It is such a failure of imagination. Why would people visiting New York City waste their time with a fake location on TV? It’s just an odd thing to do.”

Tour operator Blau said the company maintains strictly enforced rules on its “Sex and the City” route. On Perry St., while passing Carrie’s stoop, no talking, littering or photographing was allowed and customers were made to walk single file down the street.

“In the nine years of our company, we never pulled a bus onto that street,” Blau said. “We have never done anything illegal.” But she claimed that several other companies running their own versions of the tour have shown disregard for private property.

Over the years, neighbors have had complaints about “Sex and the City” fans visiting the “Bradshaw brownstone.”

“But the woman who owns the house had a chance to turn down [its being used in] the movie,” Blau said, noting its resurgence in popularity. “I’m not sure why neighbors are not blaming her.

“I felt that over the years we compromised enough,” Blau said. “The main reason why we didn’t feel welcome anymore is because a tenant in the building would sit outside their stoop and yell, ‘Idiot!’ ”

A Google search for “Carrie’s stoop” yields dozens of photos of “Sex and the City” fans sitting on their favorite Village steps. But a chain now hangs across the stoop’s front with a sign stating: “Private Property: NO LOITERING. Premises Under Video Surveillance. Violators Will Be Prosecuted.”

Brad Hoylman, chairperson of Community Board 2, worked with the tour operator to address neighbors’ concerns.

“It’s a good result,” Hoylman said of the tour’s agreement to drop Perry St. He noted there has been a 25 percent increase in foot traffic in the area since the “Sex and the City” movie’s release two months ago. “It has had a significant impact in the neighborhood,” he said. “Perry St. seems to be the hardest hit.”

Hoylman said On Location Tours has been both open about its operations in the past and willing to address complaints. The company paid for a new streetlight on Bleecker St. and helped fund renovations in the Bleecker Playground. Hoylman added that the company uses clear-air exhaust filters on its fleet, which helps lessen their impact amid the glut of pollution-spewing tour buses. “We told them they needed to let the community know what they have done,” Hoylman said.

Yet, while some view “Sex and the City”-related tourism as overwhelming the residential community, others — mainly merchants — are happy for the commercial boost. In addition to Magnolia Bakery, other local stops on the tour are O’Nieal’s Grand St. bar in Little Italy, Louis K. Meisel Gallery on Prince St. in Soho and the Pleasure Chest — the Seventh Ave. South sex-toy boutique where Charlotte bought her “rabbit.”

“The tour has been a boon to a lot of local businesses,” Hoylman said. “That’s a good thing.”

“It’s one of the more popular tours,” agreed Dirk McCall, executive director of the Greenwich Village - Chelsea Chamber of Commerce, of On Location Tours’ “Sex and the City” package. McCall called “Sex and the City” “extremely important to local merchants. Especially after the movie,” he noted, “it’s been putting a lot of money into the community.”

Yet, McCall understands the stress heaped on local residents. He called it “a good sign,” that On Location Tours has quit Perry St. on its own accord. The tour has no plans of dropping its other Downtown stops, though.

“They are one of the better tour companies around,” McCall said. “They are very good people.”

written by Joy Wiltermuth for thevillager

Or probably we're just pushing the envelope too much.
Posted by House of Onika at 2:02 AM
Email ThisBlogThis!Share to TwitterShare to FacebookShare to Pinterest
Labels: News