We said we don't want to dwell with the negative, but we got intrigued with this slice of news. There's a big chunk of money involved in the current AIG scandal with a resort spa and we were itching to find out why. Well, what do you know, it's St. Regis. Sponsors anyone? We wish! 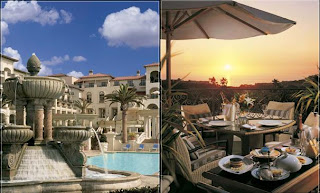 American International Group Inc. spent US$440,000 on a conference at a California resort less than a week after an US$85-billion government takeover, lawmakers said.

The bill from the St. Regis resort in Monarch Beach included US$23,380 for spa services, according to Representative Henry Waxman, chairman of the House Committee on Oversight and Government Reform. Mr. Waxman led questioning Tuesday of former AIG chief executives Martin Sullivan and Robert Willumstad as Congress probes events that led to federal intervention. -via bloomberg
Posted by House of Onika at 2:11 AM
Email ThisBlogThis!Share to TwitterShare to FacebookShare to Pinterest
Labels: News, Resort Spa