Bites: Paris gets a Starck transformation 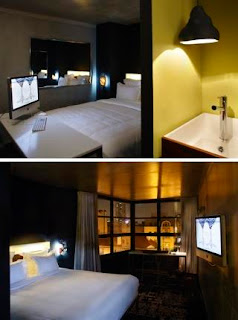 Parisian dining may never be the same again, thanks to the new Philippe Starck-designed Mama Shelter (pictured), the first hip hotel/eatery to open in the gritty, urban 20th arrondissement. More unusual than the location, though, is the staff: forget the stereotypical sniffy garçon, this front-of-house team was chosen "for their capacity for warmth and friendliness". Could be confusing for tourists.

Meanwhile, the team at Molton House, a bar/restaurant/club opening later this month in London, has been chosen "for its creativity". The, um, eclectic celebrity membership committee will apparently "guide the venue's stylistic direction". Who's on it? Nicky Haslam, Alex James, Victoria Aitken, Julien Macdonald and T4's Steve Jones among others. The mind boggles.

And finally, oh fellow Brits, when will we learn? A new survey has revealed that 50 per cent of us tip in restaurants even when the service is shocking – just to avoid any "awkwardness". This is NOT why our daily sister newspaper ran its "fair tips" campaign, you know... via independent.co.uk

Click "Read More" to view a slideshow of the rest of the photos.
Posted by House of Onika at 11:02 AM
Email ThisBlogThis!Share to TwitterShare to FacebookShare to Pinterest
Labels: Hotel, International, Philippe Starck