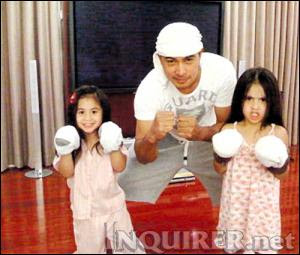 MANILA, Philippines—Cesar Montano and Sunshine Cruz have moved to their new home.

New house, new set of rules for their marriage?

“Sa tindi ng trial na pinagdaanan ng marriage namin, Buboy and I promised each other to stick together no matter what. We will double our team effort and trust.”

Shine was envious but not jealous of Buboy’s bonding time with his son (by Teresa Loyzaga) in Australia recently. “Nainggit ako kasi tagal ko na ‘di nakikita si Diego. The last time was when he was 5 years old pa. I miss him.”

Is she in favor of Buboy’s plan to run for governor of his home province Bohol? “I will support him, He has such beautiful vision for Bohol.”

Now that Pchi has built her dream house, is her dream boy just around the corner? -via inquirer
Posted by House of Onika at 1:32 AM
Email ThisBlogThis!Share to TwitterShare to FacebookShare to Pinterest
Labels: Celebrity Homes, News