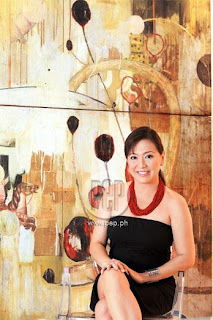 The public has been kept guessing the past few weeks about the rumored changes that will take place in the country's leading news and current affairs division.

Here's the real score that should put to rest the misinformation drive that some quarters have so desperately planted in the print media the past few weeks:

Karen will continue doing her weekly morning program Wonder Mom which has been extended to one hour as it has been earning positive feedback from viewers who find the show informative, helpful and entertaining. -via philstar 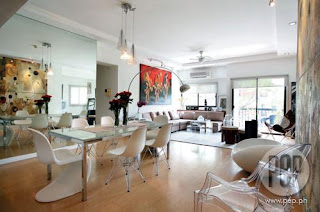 Karen Davila lives in a three-bedroom 160-square-meter condominium unit in a mid-rise building five minutes away from ABS-CBN. Karen, who designed the interior of the place herself and wanted to “make the place look bigger and more spacious,” opted for the modern minimalist look.CLICK "READ MORE" TO CHECK OUT KAREN DAVILA'S REAL HOME 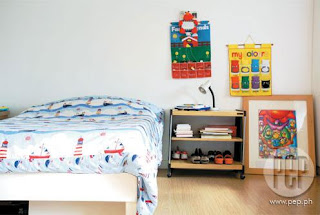 This bedroom, with its tables and chairs from IKEA in Hongkong, belongs to Karen’s five-year-old son David Joshua. “It’s very colorful and light,” says Karen of her son’s bedroom. 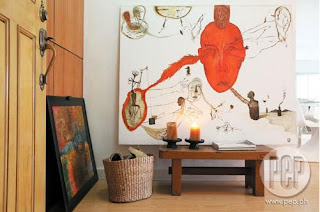 Paintings and sketches by Filipino artists, including Mauro “Malang” Santos and Vicente Manansala, adorn the broadcaster’s walls. The huge painting on the left wall is by expressionist Elmer Borlongan, who specializes in depicting “visually disturbing images of an imperfect world,” according to the website artsentralasia.com. This happens to be Karen’s favorite painting. “It wants to show children enjoying themselves amidst poverty,” she says. 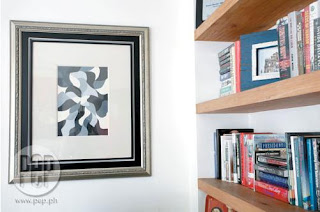 ...and Geraldine Javier (the painting on the floor). These artworks greet you when you come in through the main door. The painting in the photo above is by National Artist H.R. Ocampo. 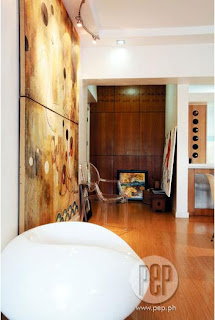 In the hallway is one of Karen’s beloved chairs—the Pastil chair. According to the New York Times, the Pastil chair and the Ball Chair, both designed by the Finnish interior designer Eero Arnio, are “the most comfortable forms to hold up the human body.” 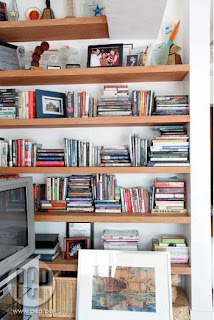 Karen’s mini-library is lined with books about the news, broadcasting, and history. “I absolutely love reading!” she declares. “I read autobiographies, lots of inspirational books.” She also owns books of Larry King’s interviews: “Very interesting. It gives you an insight into people’s minds.” For Karen, the opinion of televiewers is as valuable as the awards she has won: “They don’t care about awards. But they do care if matatakbuhan ka ba nila, malalapitan ka ba.” 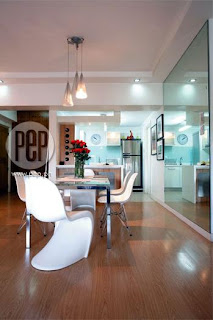 Karen’s dining table is surrounded by several designer chairs, including Ray & Charles Eames chairs (the ones with the silver legs) and a Verner Panton chair. Karen favors the Panton chair for writing or eating. “Shaped perfectly for your behind,” she quips.

She says of her decision: “The fiberglass tables and chairs are very easy on the eyes, and light passes through them. I didn’t use wood, fearing it might appear too heavy.” 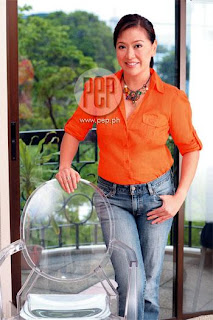 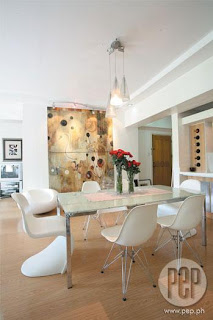 The 8x6-foot painting near the dining table is a Louie Cordero. Louie is a young Filipino painter, sculptor, musician, and graphic novelist whose comic book, Nardong Tae, is a cult classic. He has exhibited his works in Asia, North America, and Australia. 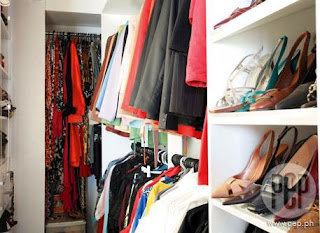 Though Karen didn’t achieve her dream of becoming a fashion designer, her fashion sense is apparent in her extensive wardrobe. She became part of 2007 Best-Dressed List of Preview magazine, which quotes her as saying that her “personal style can be described as elegant and functional” and that her favorite local designers are Rajo Laurel, Inno Sotto, Randy Ortiz, and Dennis Lustico.

Wow! I love her dining set! It's really beautiful!