Philippine School of Interior Design moves to The Fort 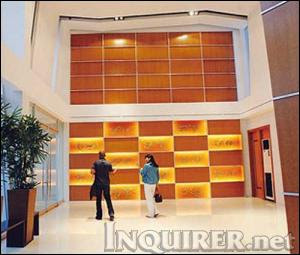 After 41 years of producing many of the country’s best interior designers in a cramped, unattractive building on Chino Roces Avenue in Makati, the Philippine School of Interior Design (PSID) will finally move in October to a new, bigger and better home at The Fort in Taguig.

Inset Photo: THE INSTITUTE’S spacious lobby evokes the look and feel of a hotel.

The three-story building on Bayani Street, with ample basement parking, will be known as the Asian Institute of Art and Design (AIAD). It will have a spacious, high-ceilinged lobby, irregular ceiling treatments, and sculptural details in corridors and laboratories.

Said to reflect the timeless appeal of a hotel and the functionality of an institution, the lobby took its cue from PSID’s old building by incorporating several letters in the alibata (ancient Filipino alphabet) into its design.

Click "Read More" to read the rest of the entry.

Each letter, done in Verdigris metal cutwork that illuminates aluminum frames and veneer-clad walls, stands for the Filipino equivalent of PSID.

As one enters the premises, an embossed quote on the left side of the wall serves both as inspiration and reminder to design students: “Genius Lies in the Details.”

While students used to form single files to go up and down the narrow staircase in the old building, they can now move with ease on a wide concrete-and-steel staircase. The improvements extend to laboratories and lecture rooms.

“Instead of flat ceiling, I designed an irregular one that could stimulate students’ imagination and improve the lab’s acoustics,” says interior designer Nicky Jardenil, one of PSID’s faculty members.

For lack of a better term, Jie Pambid, also an interior designer, educator and PSID’s director for external affairs, calls the ceiling treatment a “modern variation of the coffered ceiling.”

Like a blank canvas, PSID’s four labs and two lecture rooms on the first floor are done primarily in white. The lecture rooms’ ceilings, however, are designed flat and unobtrusive to allow students to focus more on the teacher.

As a teacher himself, Jardenil understands how hard it is to gain young people’s attention (although, majority of PSID’s students are already college graduates). He thus equipped each lab with a sound funnel made of gypsum board jutting out from the wall behind the white board.

“Whenever the teacher talks in front, the sound, instead of going up, goes directly to the students,” says Jardenil.

Special tables
Each lab has tables that, with few minor adjustments, double as drafting boards. Students no longer have to bring their portable boards when lab activity shifts from lectures to actual rendering.

Axent Wood of Cebu, owned by Mark Cancio, designed and manufactured the special tables and sturdy classroom chairs made of several kinds of wood.

For the first time, too, PSID will share its building with another field of related learning. The expansion will thus be literal and figurative, as the AIAD houses the Specialized Art and Design Center (SADC).

“That’s why we christened the building as an institute,” says Pambid. “It’s now composed of two schools, but there’s always the possibility of opening it up to other branches of art and design.”

To occupy the second floor, it will offer special courses for professional artists such as muralists, graphic and lighting designers.

To open it, muralist Alfred Galvez will conduct workshops on decorative faux finishes.

“They’re design, not crafts seminars,” he stresses. “We’re basing the effort on the concept that design is a cerebral activity. Before you can even do crafts, you must be cerebrally motivated to produce a sound design.”

As early as 2002, Rosario Cancio-Yujuico, PSID president, first thought of putting up a new building befitting the school’s stature and to accommodate the burgeoning student population. It wasn’t until 2005, however, that actual work on PSID’s dream home began.

Now that PSID can accept more students, Pambid and his colleagues are optimistic.

They also look back with pride on the years they spent molding future interior designers in an unbelievably small building.

“I always call it the beauty within,” says Pambid of PSID’s old Makati address. “We’re proud of our products. Since we worked in a small space, it inspired students to leave the box and be more creative.”

Imagine what they can do now. The level of their creativity is bound to soar to even greater heights. -via inquirer.net
Posted by House of Onika at 12:37 PM
Email ThisBlogThis!Share to TwitterShare to FacebookShare to Pinterest
Labels: Interior Design Schools, News