Is that a bear and crab we see?
Apparently, yes. Sarah Palin’s office interior design in Anchorage,Alaska. Sarah’s father shot the grizzly bear whose hide is now draped over the sofa in her office. Sarah Palin, too, hunts and fishes. She runs marathons. Sarah Palin delivered her fifth child during her first term as governor. -via archupdate 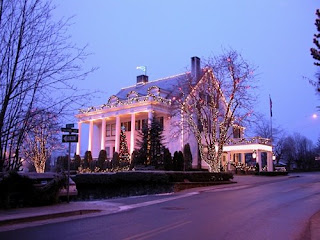 We're wondering how much she spends on electric bill

As the U.S. election scene seems to be hotting up and both the major parties holding conventions inspite of Hurricane Gustave, we feature the residence of the Vice President pick of the Republican party, Gov. Sarah Palin. Sarah Palin been governor for just two years, and before that was the mayor of a small town. Sarah Palin’s certainly one of the GOP’s top young prospects.

Sarah Palin has her residence at the Alaska Governor’s mansion. 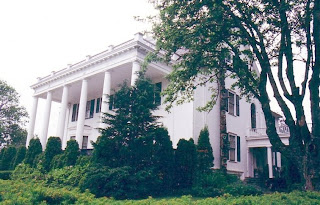 White House?
The Alaska Governor’s Mansion, located at 716 Calhoun Av., Juneau Alaska, is the official residence of the Sarah Palin and her family. It was designed by James Knox Taylor. The Governor’s Mansion was first occupied in 1912 by Territorial Governor Walter Eli Clark.

The original budget for the 2 1/2-story 12,900-square-foot frame structure and furnishing was $40,000 and included planned servants quarters and a territorial museum on the third floor which were never built.