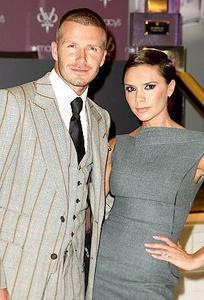 The perennial problem with household help resurfaces on a celebrity level.

Two housekeepers who work for David and Victoria Beckham have been arrested for suspicion of theft.

Police busted Eric Emmett, 55, and his wife June, 56, as well as a 25-year-old man, after several of the Beckham couple's items -- including Victoria's dresses and David's soccer memorabilia -- ended up on eBay, the Associated Press reports.

While no charges have been filed, police issued the following statement:

"We are currently investigating an allegation of theft from a private address in Sawbridgeworth. The theft was reported to police at 4:45 p.m. on Friday, October 10, 2008. A 56-year-old woman from Essex and a 55-year-old man, also from Essex, have been arrested in connection with this incident and are currently on police bail."

Added an eBay rep: "If it transpires that our site was being used to list stolen goods then we will work with the police to press for the harshest penalties." -via yahoo news
Posted by House of Onika at 2:21 AM
Email ThisBlogThis!Share to TwitterShare to FacebookShare to Pinterest
Labels: Celebrity Homes, News