Somebody has got herself a papasan chair from the flea market for a fraction of the price. A brand new papasan chair in the UK can fetch for £90.00 or more or less $180 depending on the exchange rate.

Ecstatic about her bargain find, she is however left without the cushion. Luckily, creating a cushion for her papasan is just as easy as 1,2,3!

Here's a little history about the papasan chair: A papasan chair as shown above is a large rounded bowl-shaped chair with an adjustable angle similar to that of a futon. The bowl rests in an upright frame traditionally made of rattan, but also sometimes made of sturdy wicker or wood. While similar designs of furniture have existed around the world, the papasan was introduced in the United States in the 1950s, and rose to great popularity in the 1970s.

Click "Read More" to take part in this exciting project! 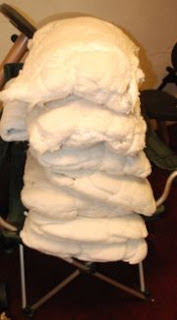 1) Dig all those old pillows out of your closet or garage and launder them. Remove the pillow slips and pillow covers. Cut the pillows diagonally to form wedges.


2) Place 6-8 of your half-pillow wedges on the chair seat, arranging them until all of the rattan frame is thickly covered. This could take anywhere from 6 to 10 pillow wedges (3-5 old pillows) depending on their thickness and the number of times they've been washed previously.

3) Lay the wedges on two large pieces of cloth for the cover. (You should cut both sides at the same time, as they'll be sewn together later to make the cover.) Be certain your area is flat. The floor works well. Trim the edges of the wedges to make the outer edge smooth and round.

4) Cut the two layers of material around the pillow wedges, leaving approximately a two inch margin. 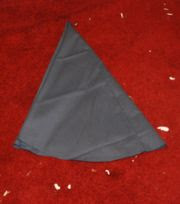 5) Fold the resulting circles in half, and then in half again and once again to get one eighth of a circle. Trim the edges again to ensure that you have as close to a perfect circle as possible.

6) Sew the perimeters of the two cloth circles together, leaving two feet of opening for stuffing.

7) Turn and stuff by placing your pillow wedges snugly inside.

8) Sew through the entire thickness and tie off snugly approximately every 12 inches. Do this between each pillow wedge for easier poke through and tie off.


But if there are too many things on your plate, mypapasan.com manufactures personalized papasan cushions.

We really hope you can send in your "home-made" papasan cushions so we may feature them here in the future.

Or you can be like this guy who literally cooked a different idea for his papasan.

Posted by House of Onika at 8:11 PM
Email ThisBlogThis!Share to TwitterShare to FacebookShare to Pinterest
Labels: Furniture, How-To

The cool thing about it is when you get sick of the color cushion you bought, or the fabric is getting kind of dingy, you can simply replace it with a fitted sheet or any other material. You can match your color scheme or use a contrasting color to make it stand out in the room.
------------------------
Sally
Transmitter